Cosmo had his surgery about 10 days ago, and he had his stitches removed yesterday.  Let me just say that this dog has been the best patient I’ve ever seen!  He has not fussed about being crated almost 24×7 and has taken his meds without any problem.

We are both looking to the day that he can go out and potty without being attached to me via a leash.  Cosmo is also celebrating the elimination of the Kong cone.  He can now lick his butt without hindrance.

Auggie has benefited from the extra one-on-one time with me while Cosmo has been crated during his down time. He has finally understood that barking at me and trying to chew on my hands is bad for his well-being.  Finally.

Now, if Cosmo would start to walk on his bionic leg, I would feel way better.

A couple of new Auggie photos … He is such a ham!  He is almost 7 months old and weighs about 65 pounds! 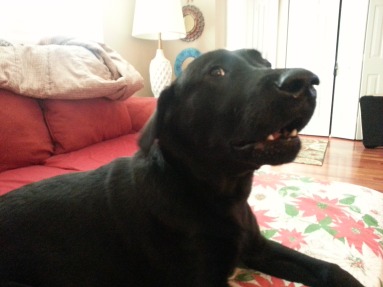 The Original Two Barking Dogs ~ How It All Started! Click on photo below for video!