First, let me say it is safe for the dog(s) to eat watermelon, just don’t overdo it, ok?

My neighbor gave me a watermelon, some tomatoes, and also some blackberries on Sunday.  The tomatoes are gone, as are the blackberries, but I only just sliced up half of the watermelon this morning.

Cosmo has become a real pest to me when I’m in the kitchen lately.  Clover politely sits in the doorway to the dining room, while Coz is underfoot, and annoying me.  I keep moving him to “a spot” in the dining room where he can see what’s going on, and stay out of my way.  It works for a few minutes, and et voilà! there he is underfoot again.

As I was cutting the watermelon up, I could feel his cold little nose poking my leg, as in (à la Jerry Lewis) “Hey, Laaaady! What about me?”  I gave him a piece of the watermelon to see if he would eat it, thinking he would spit it out and leave it for Clover to Hoover up.  But, surprise!  He ate it right up.  Clover came to inspect, and I gave her a tidbit also.  By the time I had cut up half of the watermelon, all three of us had a good share of the melon.

It always surprises me when Cosmo eats something new without rolling it around on the floor, sniffing it for 10 minutes, or waiting to see if Clover eats it first.  Its like she’s his royal taste tester or something.

Check back tomorrow, as the next post in this series may be, “What Dog’s Like – The Stanley Steemer Guy!” 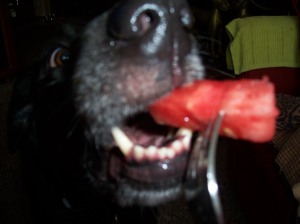 Sorry for the quality of the photos, but it was the best I could do with watermelon in one hand, camera in the other, all the while trying to keep them both from trying to snag the watermelon in the bowl in my lap.

Hand it over already, Give it Up! That Watermelon is Mine! 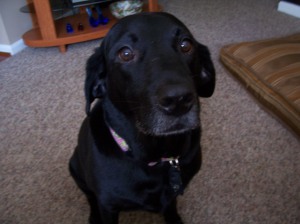 Please Miss, May I have Another?

The Original Two Barking Dogs ~ How It All Started! Click on photo below for video!